In reference to the McMillan project, the matter of DC declaring the land as surplus (so it may be sold to the VMP development group) is now before the DC Council. Elizabeth “Zeba” Floyd, the LeDroit Park representative on the McMillan Advisory Group, attended and testified at a roundtable with the DC Council last Wed. Nov. 12th. Her main request was for the Council to require a comprehensive transportation management study including all the projects coming ‘on line’ in the vicinity of McMillan.

Elizabeth would like for others to know that they may also submit written testimonies through close of business on Wed. Nov. 19th to Ms. Tai Meah: tmeah@dccouncil.us.

The link to the legislative proposals before the Council is: http://dccouncil.us/events/committee-on-government-operations-economic-development-joint-public-roundt

More Information regarding the McMillan Project:

– In 1901, as a result of US Senate Park Commission efforts, a comprehensive Plan for the City was developed.  The McMillan Plan and resultant McMillan Park Reservoir Site was one result of those efforts.

– The 93 acre McMillan Park Reservoir Site included a reservoir, park space and a sand filtration area which served as the first water treatment project in the District of Columbia.  The Filtration project provided clean drinking water for District residents under operation by the US Army Corps of Engineers from 1905-1986.

– The Site was fenced off during World War II in fear of enemy sabotage of the Reservoir water.

– The Site is listed as an individual landmark in the DC Inventory of Historic Sites and the National Register of Historic Places.

– Several proposals for development have been proposed in the past, but have met with opposition from the Community.

– In 2006, the District awarded a contract to Vision McMillan Partners (VMP) to develop a master plan for the site with the District acting as developer of the Sand Filtration Site.

– a Community Center and Park

– The Medical Offices are proposed for development in the first phase of work. The Park is likely to be the last phase of the development and will be owned (and possibly operated by the District).

– VMP’s proposal has received preliminary approval from Zoning and is anticipated to be zoned as C3C at the north/Office area.

– VMP’s proposed development would be on a “plinth” above street level bounded by the Olmstead Walk. Proposed building heights of 115′ above a benchmark elevation are proposed for the north section (Office/Retail). The plan shows Residential in the center and the Park/Community Center at the south.

– Due to the historic nature of the site, the Mayor’s Agent will need to designate the project as one of “special merit” to authorize the extensive demolition of structure. The Mayor’s Agent held hearings on the matter and his decision is expected in early 2016.

– If the project moves forward, DC will perform demolition and prepare the site for delivery as ‘pad’ to the Developer.  $50 million has been budgeted for that portion of the District’s work.

– The matter of declaring the property as “surplus” is now before the DC Council.  If declared “surplus” the site can then be sold to VMP.

– Assessed value of the site (not market value) estimates range from $25-100 million.

– Initial sale price of the land was estimated as $30 million, but the final sale price has not been determined.

– The McMillan Advisory Group (MAG) was formed by the District of Columbia in 2007 to gather community input and report to the District. The MAG’s members include members from communities adjacent to the site and from nearby communities in ANC 5A, 5E and 1B.  The MAG meets monthly on the second Thursday of the month from 7 – 8:30 pm.

– LeDroit Park has one voting membership on the MAG.

– LeDroit Park’s first and current representative is Elizabeth Floyd who may be contacted at zeba4mcmillan@earthlink.net.

– Ms. Floyd recently testified as a MAG representative at a joint roundtable convened by Councilman Kenyon McDuffie, Chairperson on Government Operations.  The primary focus of her oral testimony was a request for a comprehensive traffic plan including 3 million square feet of development approved or proposed on the McMillan site and nearby parcels. Ms. Floyd also submitted written testimony for the MAG as a matter of record.

– Written testimony on the land disposition (‘surplus’) may be submitted to the Council through close-of-business on Wed., Nov. 19, 2014.

For more information, you are invited to contact Elizabeth directly, using the following email: zeba4mcmillan@earthlink.net. 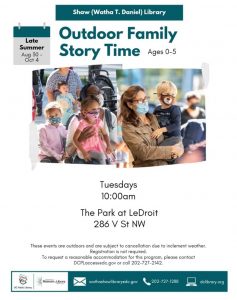