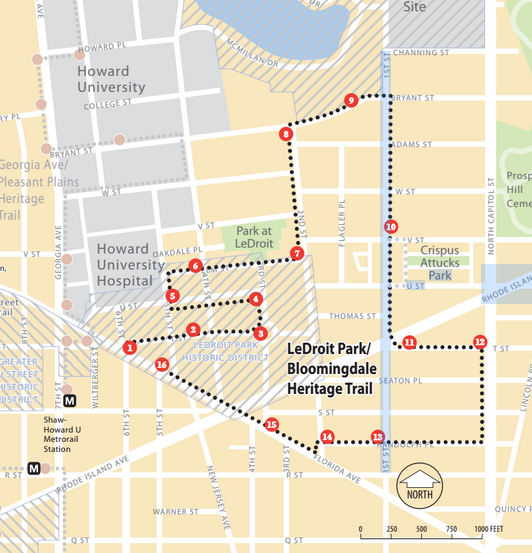 “Worthy Ambition”, The LeDroit Park – Bloomingdale Heritage Trail, reflects the accomplishments of the people who lived in our neighborhoods.  The following is a brief description of the content of each sign on the trail.

Sign 1: The Flower Garden of Washington discusses the creation of LeDroit Park, the fence that separated it from Howardtown (north of Elm Street), and the removal of the fence which opened the neighborhood to African-Americans.

Sign 2: T Street Elites portrays some of the very accomplished African-Americans who lived on this street.

Sign 3: A Voice From The South, at Anna Cooper circle, discusses the life and work of Anna J. Cooper, and points out the Birney double house, as well as presenting a brief history of the circle itself.

Sign 4: Government Girls talks about Slowe Hall on 3rd Street – currently a Howard dorm, but built to house women who were working war-related jobs during the Second World War.  It also points out the homes of some of the people who lived on 3rd Street.

Sign 6: Best In The Country discusses more of the accomplished people who lived here, including the poets Paul Laurence Dunbar and Langston Hughes.

Sign 8: Water For The City introduces Bloomingdale, the Bryant Street Pumping Station, and Chita Rivera, who grew up on Flagler Place.

Sign 9: Court Nullifies Racial Covenants – the case that led to the Supreme Court decision outlawing racial convenants in housing began on Bryant Street.  McMillan Reservoir served as a park for neighborhood residents until it was fenced off during World War II.

Sign 10: Bloomingdale presents its “classic Victorian rowhouses,” some of the prominent people who lived in them, the Reservoir Market, and Crispus Attucks park.

Sign 11: Dividing Line discusses segregation in the neighborhood (Rhode Island Avenue was a racial dividing line), the 1963 March on Washington, and the 1968 riots.

Sign 12: Fathers and Sons – St. Martin’s Catholic Church, the first African-American priests, and the church’s involvement in helping to clean up the neighborhood are presented here.

Sign 13: Home to Headliners portrays some of the accomplished people who lived in Bloomingdale, including Senator Edward Brooke, “Moms” Mabley, and Odessa Madre – the “Al Capone of Washington.”

Sign 14: Great Expectations profiles more of the accomplished people who lived here, including “four young women who grew up to be judges.”

Sign 15: The Prettiest Place discusses the original Elks Lodge mansion, as well as some of the noted people who lived nearby.

Sign 16: The Doctor Is In – the current Shaw Tavern was originally the Ethical Prescription Pharmacy, and many doctors and dentists lived and worked nearby.  A private hospital operated on the 1800 block of 4th Street.

Did you know that Griffith Stadium was home to the Senators, DC’s former major league baseball team? Learn all about LeDroit Park’s exciting past…